We went to Colours on Sunday, dodging the forecasted gales and downpours as we headed along the M4.  I've always liked Colours... the venue at Newbury racecourse is light and has plenty of space and there's always a good range of games and traders.  It's a bit of a trek but not too bad with a reasonable selection of CDs in the car.

The planned shopping list was quite modest... I'd hoped someone there would be stocking the Sarissa Precision building range.  I was hoping to get a couple of their Japanese buildings for my Ronin factions but sadly couldn't find any (more on these later).  My son and I have also been debating changing tack on our WW2 project...we'd bought some of the Warlord Games figures ages ago and have built them but not painted them yet (actually he's further ahead in the painting stakes than I am).  Lately though we've been thinking that we need to downscale to 20mm or 15mm.  With 28mm there is no scope really for introducing vehicles or armour which we're both keen to do, so we spent some time at the show pondering the ranges available and the relative merits of each.  I think we're tending to 15mm...now we just need to agree a period.  I think we're both keen on early war and my son spotted the Early War Miniatures Belgian range which took his fancy!!

Our purchases did include the Empire of the Dead rules and a faction set of Werewolves.  The rules look very nice but there are lots of pictures and lots of fluff with relatively little content.  Looks fun though!  Nice werewolves which would fit into IHMN as well. 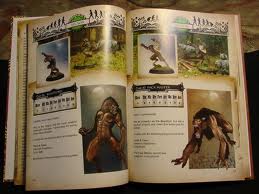 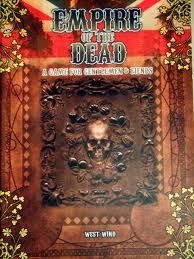 I also bought figures based on Inspector Le Brock and Detective Ratzi from Bryan Talbot's lovely Grandville comic book.  This is a steampunk themed strip set in a world filled with anthropomorphic animals.  I've always really liked Talbots comics from Luther Arkwright to the brilliant Tale of One Bad Rat and Grandville is fantastically drawn and great fun.  When I saw the miniatures I knew I needed them... I've no idea what I'll do with them though!

They're made by Crooked Dice and are excellently sculpted..  They told me they're planning some more animal characters from the strip as well so worth looking out for.

We'd checked out the bring and buy with no joy, but a later inspection revealed 10 nicely painted Samurai so my Ronin forces are growing faster than expected

It's pretty obvious I'm a fan of skirmish level games and as I also love all things Samurai the new[ish] set from Osprey, Ronin were very tempting.  I haven't played a game as yet but based on a couple of read throughs the rules look pretty good.  In presentation they're very similar to In Her Majesty's Name... fairly concise with lots of pretty pictures and a range of factions to choose from as well as a points system to build your own.  Combined with a series of Buntai [Samural 'gangs'] from North Star it all proved too tempting.  I bought the Sohei monk buntai and a Bushi Buntai [regular Ashigaru and Samurai].  There are also rules for bandits, ronin, ninjas etc as well as Ikko Ikki, Chinese and Koreans so plenty to choose from. 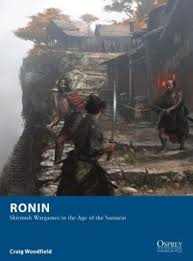 The rules look fairly straightforward: opponents choose between attack and defence points each turn to determine how they'll behave and there are a host of special skills and abilities to help the lowliest monk defeat the most impressive Hatamoto. 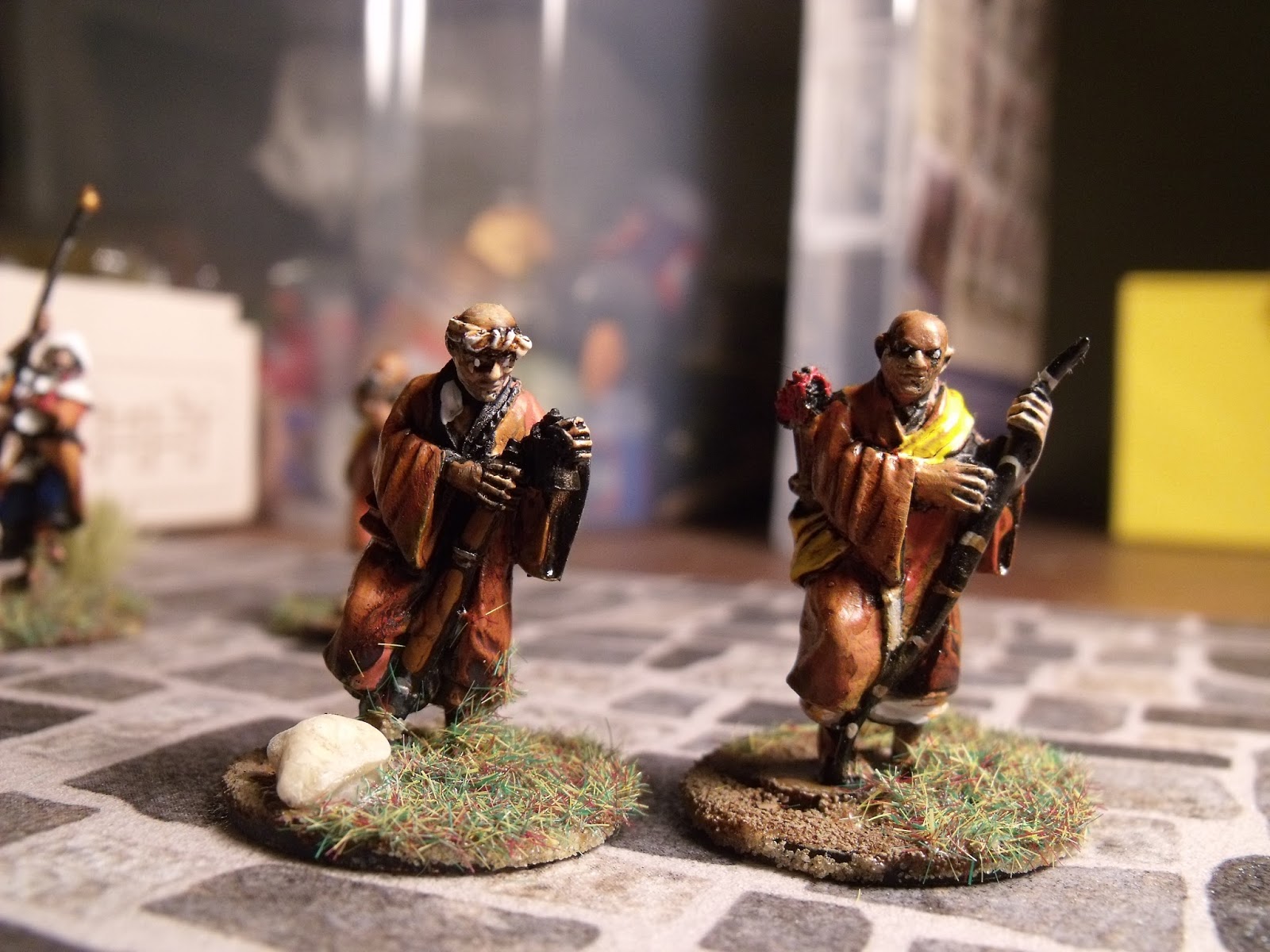 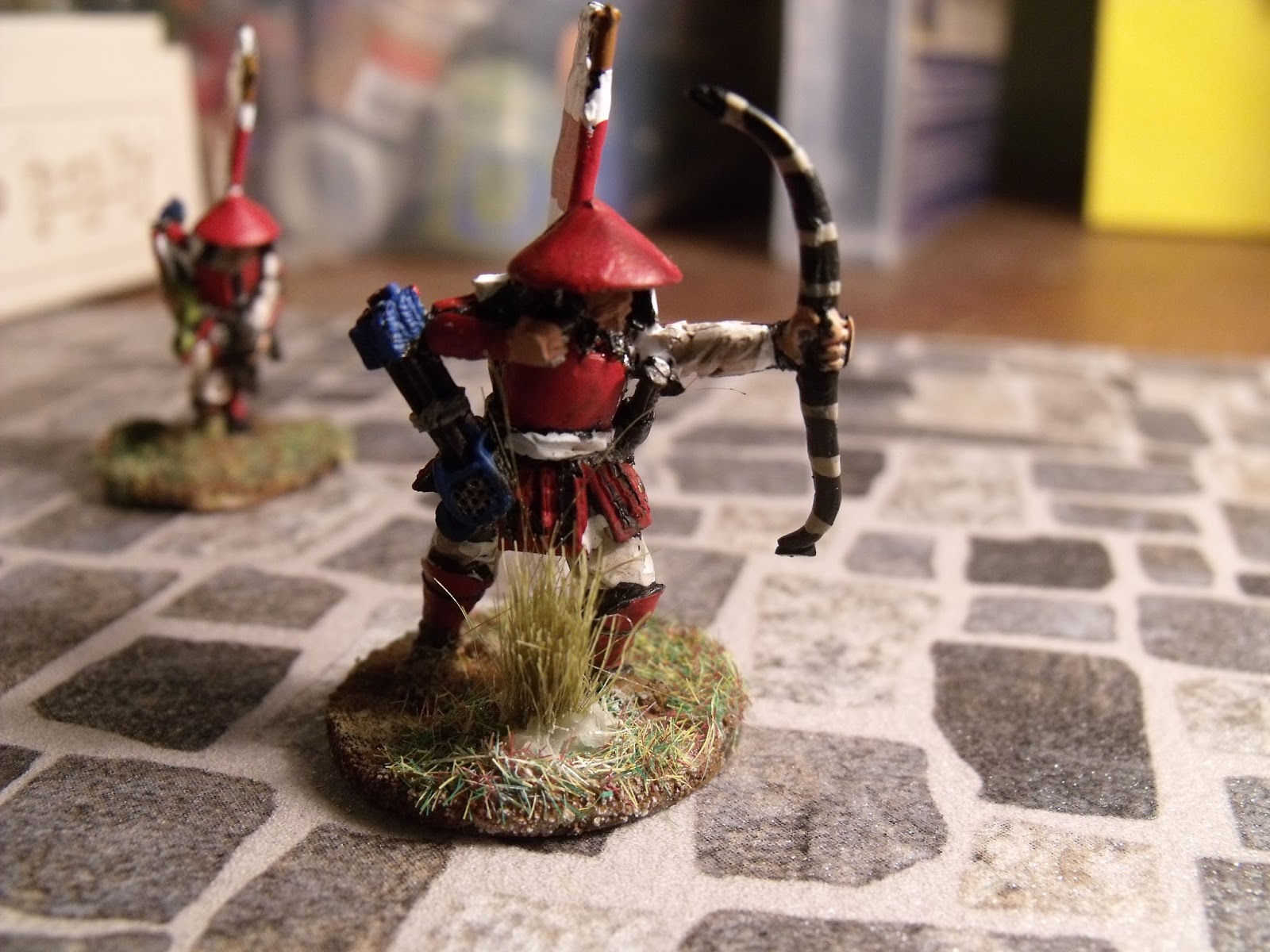 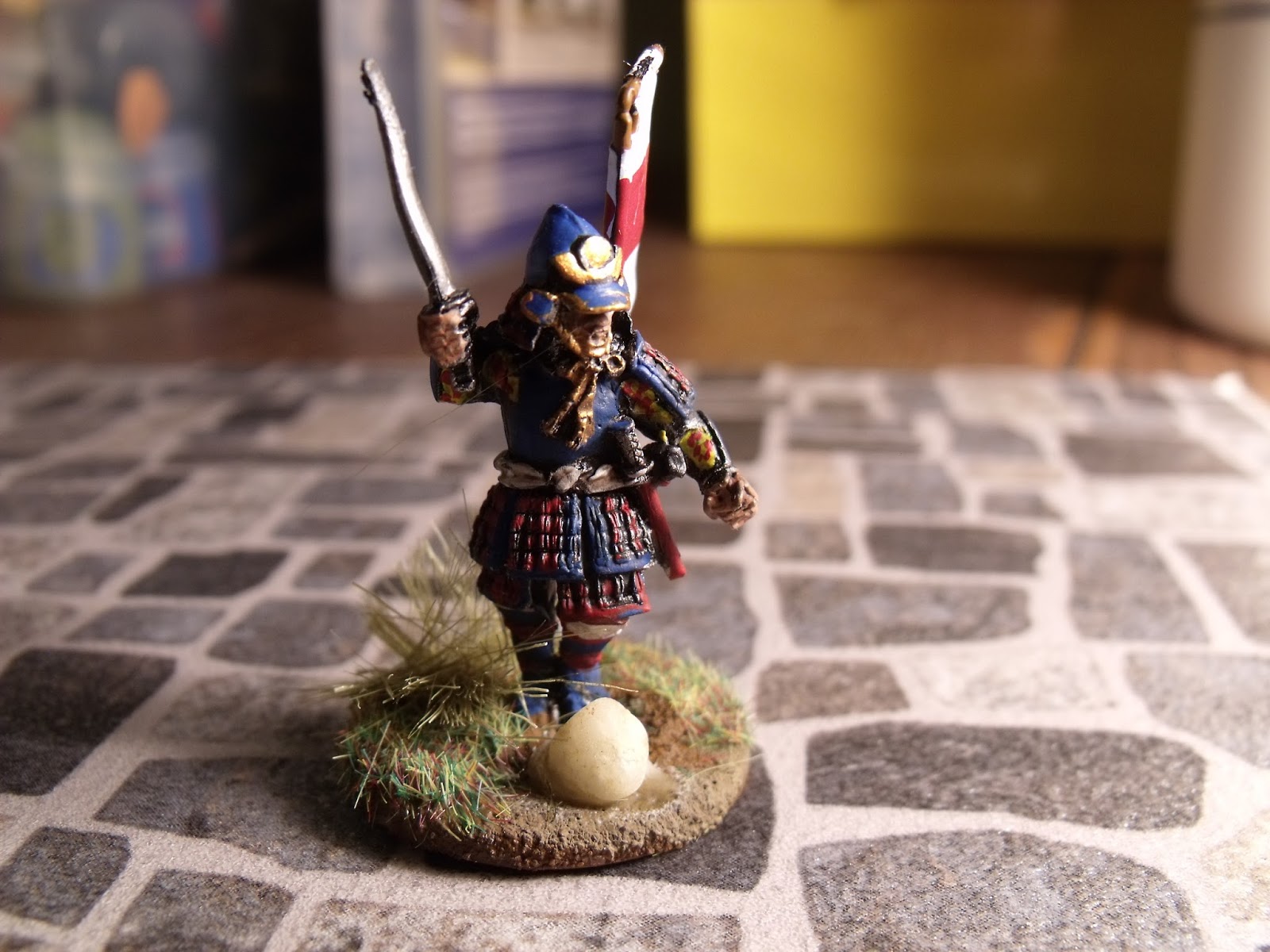 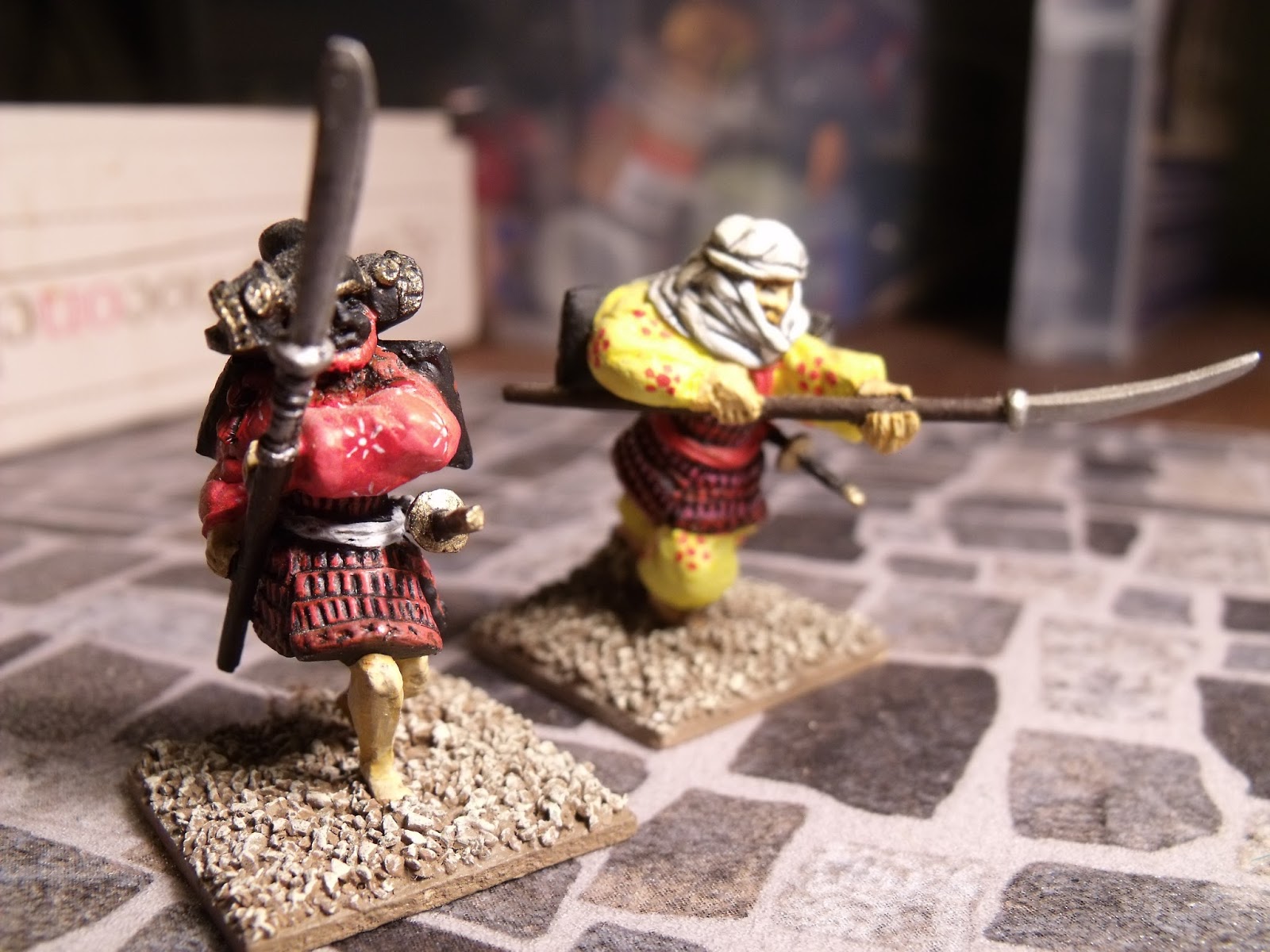 I've ordered a couple of buildings from Sarissa since I couldn't get them at Colours and some cherry blossom trees from Ebay to give some authentic Japanese flavour.

I dug out my Vietnam figures a couple of weeks ago as Andrew at the club wanted to try out Charlie Don't Surf, the Too Fat Lardies rules.  I umpired as Andrew's US troops swept though a valley towards a village and walked into the inevitable NVA ambush.  The US troops were fairly well shot up until they were able to get into cover and begin to concentrate fire.  Kevin's NVA tried charging the US troops and were pretty well hammered for their pains. 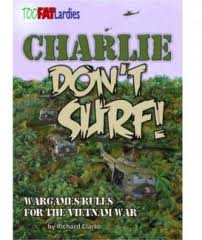 Both sides dug in in jungle cover and the US eventually managed to call in artillery [after several rounds of trying] which actually proved only mildly annoying rather than the devastating strike Andrew had been hoping for.  It did force the NVA to pull back and allow the US to drive on through the jungle.  By the end of the game the US had edged the win but at a heavy cost.

Last night I played my first game of Chain of Command, the new Platoon level game from Too Fat Lardies [again... I think there's a bit of a theme here!].  Thanks to Keith who supplied everything we got to try out an encounter between US and German troops.  The game feels like a modified version of IABSM with Patrol markers replacing blinds.  These lead to the early stages of the game being a bit cat and mouse as each side tries to get into a good position.  The markers then form the deployment [or Jumping off] markers.  The mechanics are similar to a lot of the TFL games but... no cards!  Instead commands are determined by dice rolls which can activate sections or commanders etc but can also trigger the end of the turn. 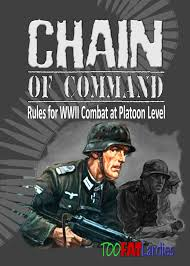 The game played really well [not least because I won!!] and is ideal for this level of game.  Fairly bloody, although that might just have been Keith's unlucky dice rolling and good mechanics to reflect command and control and friction etc.

There are already additional lists appearing on line to complement the US, British, German and Russian ones in the rules.... including Belgians which neatly brings us back to the beginning of the post!
Posted by alastair at 21:54