Defeated by a boardgame

A while ago I picked up a heavily discounted copy of GMT Games' Pendragon which is a game I've been interested in for some time.  It's one of GMT's COIN games where each faction has very different mechanics and victory conditions and is set at the end of the Roman period in Britain.  It's a period I've always found really interesting and I'd been keen to give this a go. 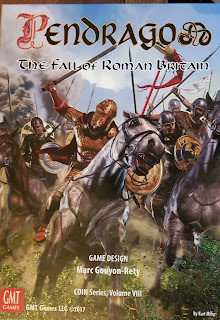 The game is really nicely produced with a lovely board and lots (...and I mean lots!!) of wooden blocks and counters.  There are 4 factions...the Dux (the remnants of the Roman cavalry, so effectively Arthur), the Civitates (Romanised Britons) and the raiding parties of the Saxons and Scotti.  Each side has a different range of actions that they can complete each turn and the 2 British factions can cooperate until the split from Rome is complete but effectively the Britons are concentrating on building up resources and towns while the raiders want to steal their gold and ultimately settle on the mainland.

On first inspection the rules looked  pretty daunting with a 44 page rulebook and a 72 page Playbook to explain how the rules work in practice...to be fair the Playbook also includes a lot of design notes, history, explanations of the events that drive the game and even a pronunciation guide!  As an example of the complexity here is a flowchart for the solo version of the game... 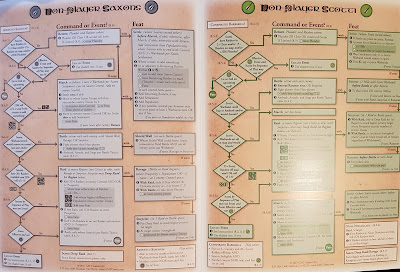 My son and I tried a play-through at the weekend when he was home for a few days.  Set up took ages...there is a box for just about everything on the board but we had to read both books carefully to make sure we had everything in the right place. It does look very nice once it's all out though... 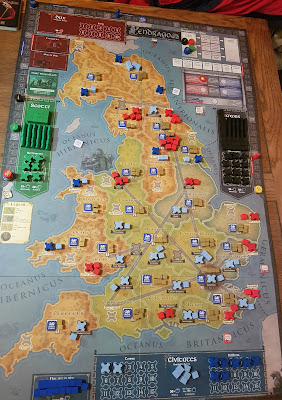 Each turn a card is drawn which indicates the order each faction acts in and you can also see the next card that is coming up so a decision can be made about whether to play this turn or pass for a better position in the next round.  Turns allow each faction to either play the event on the card or carry out a a number of actions.

In the 1st turn my son's Scotti raiders attacked the Western coast attempting to loot and pillage. My Civitates militia sensibly retreated into their forts where some survived although I did lose one fort completley.  In one region the Dux cavalry were present and I tried fighting the raiders in the open...combat is pretty brutal if you are a raider and you can expect heavy losses  but even so my precious cavalry were wiped out and their fort overrun.  Combat follows a lengthy process which is outlined on another prompt sheet although by the end of the turn we'd sped up a bit in working through this

We drew a halt here for the evening and were planning to resume the next day but when we sat down to start neither of us could summon up the energy or enthusiasm to give it a go and we ended up packing it all away again!  It does feel like there is a good game in here somewhere but it is overwhelmed by the sheer volume of stuff that is going on and that you need to keep track of.  My initial thought was to stick it on eBay but my son has convinced me to hold off and we may give it another go when he's next back home.  To be fair, I've since read a number of reviews saying this really isn't the best place to start the GMT COIN series as it is pretty complex

This was one of a 3 GMT board games I picked up cheaply recently, the others being Blackbeard (Pirates obvously)  and Iron and Oak (ACW Ironclads) and I'm hoping they'll be a bit more lightweight!
Posted by alastair at 15:09