This week we had another go at Cruel Seas, kindly hosted by Eric the Shed.  This time round there were 4 players which gave me a good excuse to get more boats on the table.

The scenario was an ambush on a German convoy which had just slipped out of a harbour.  The Germans had 2 Merchantmen to protect which were escorted by a Minesweeper, an Armed Trawler and 3 E Boats.  The British were attacking with a flotilla of Vosper MTBs and a single Elco.

We used the rules mostly 'as is' but added a few  ideas from the David Manley Amendments (which sounds a bit like the latest attempt to sort out Brexit!).  I didn't use all of these but I did change the turn rules and added in the use of star shells and flares from Action Stations.  The rules in Cruel Seas seem far to simplified when it comes to visibility.  We also played on a much larger table(8` x 4`) with rocky islands to break up the open seas, and ignored the turn limit. 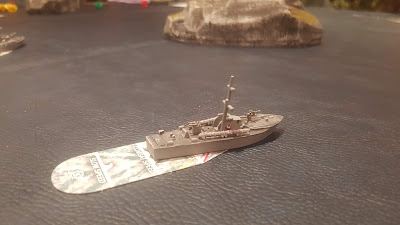 The MTBs split into 2 groups and my group attacked first...firing off torpedoes rather optimistically at the larger boats and trying to avoid the illuminated areas of sea.  The enemy boats managed to steer away from the torpedoes and the E Boats sped in to attack the Vospers.  Normally you'd expect games like this to be full of high speed manoeuvering but at one point the E Boats had shifted down to 'slow' and then came to a halt as they struggled to hit the speeding MTBs in the darkness.  This tactic paid off and they were able to shoot up the passing boats.  One of the Vospers suffered a Bridge hit and sped headlong into the side of the German minesweeper with catastrophic results (for the Vosper...I'm not sure the crew on the minesweeper even noticed!).  This has happened to me in every game of Cruel Seas I've played so far!! 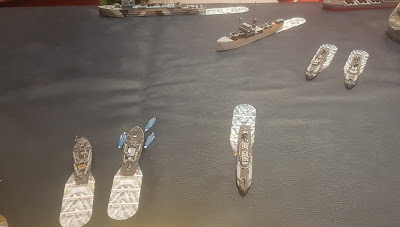 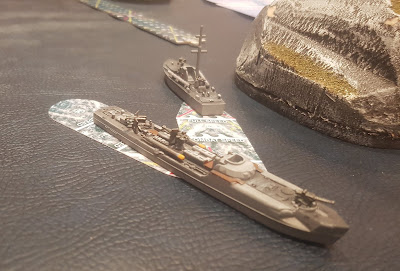 My Elco was able to fire off his last torpedo before speeding off into the night.   It missed the trawler but passed on into the side of one of the Merchantmen.

My half of the flotilla was now spent...the 2 Vospers had been sunk and the Elco had sped off once he'd run out of torpedos.  I did have a last surprise for the Germans...the flares and explosions had attracted the attention of a Blenheim which dropped in on a bombing run aimed at the 2nd Merchant ship.  On its way in it drew fire from the 2 E Boats which drove it off before it could tackle the larger ship.


The 2nd MTB group had now worked their way round to attack from the other side and quickly finished off the Minesweeper with gunfire before taking on the trawler.  In a last flurry of torpedoes the other Merchant ship was sunk and it was  convincing (if costly ) victory for the Royal Navy 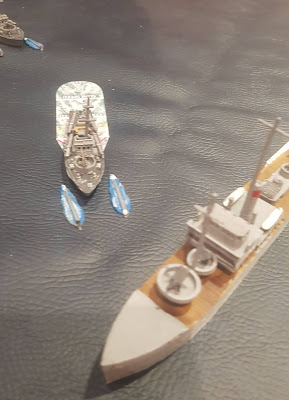 The rules again worked well...it proved very hard to hit in the dark unless boats were at Slow (which I guess is pretty realistic) but no one made much use of flares and illumination to help with this.  I think the Germans found the slow speeds of the larger boats quite frustrating (just getting the Merchant ships on the table took a couple of turns!) and I think  it felt a bit inevitable that they were going to get torpedoed eventually.  Despite this I think everyone had fun!