Labyrinth - The War on Terror


So the first proper game of 2018 was a boardgame which my son got at xmas  (I'm feeling old...we used to get him games like Operation and Monopoly, then Warhammer stuff and now it's games about the global war on Terror!) 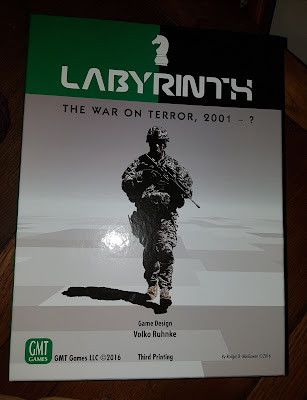 Labyrinth is a (kind of) sequel to the excellent Twilight Struggle but focuses on events from 2001 onwards.  The players either represent the United States or Jihadists, each trying to bring about different victory conditions.  Like Twilight Struggle each player holds a hand of cards which are either played for Operations Points which allow you to do stuff, or to trigger an event which  has good consequences for the player.  As in TS the downside is that if you play a card for the points, but the event would benefit you it doesn't happen, whereas if it benefits your opponent then it does occur.  This means some careful thought has to go into which card to play and when. 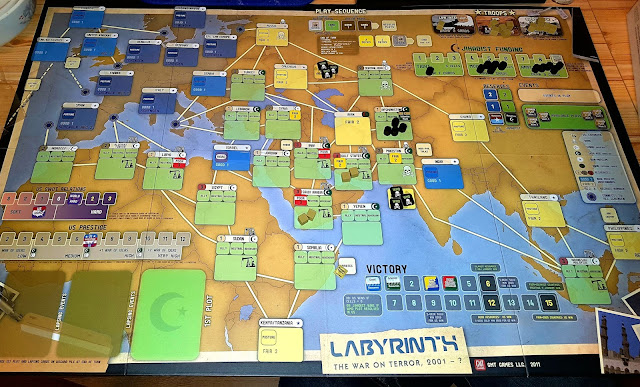 The map focuses on the Europe, the Middle East and parts of Africa and Asia.  Each Muslim country
has a state of government which can be influenced by either side: the USA wants to have 'Good' governance as this makes states less likely to be swayed by the Jihadists and also enhances the USAs prestige rating: once enough states are 'Good' the USA wins.  The Jihadists, meanwhile want to destabilise the governments of Muslim states as a prelude to then launching a major Jihad and creating an Islamic regime...get enough of these and the game is over.  Of course the Jihadists can use other tactics including getting their hands on some stray WMDs that might become available...either via Pakistan, Russia or Centra Asian States.  If the Jihadists can sneak one of those into the USA and set off a nuke or release a deadly virus then it's an immediate win although it's seems like an exceptionally tricky thing to pull off. 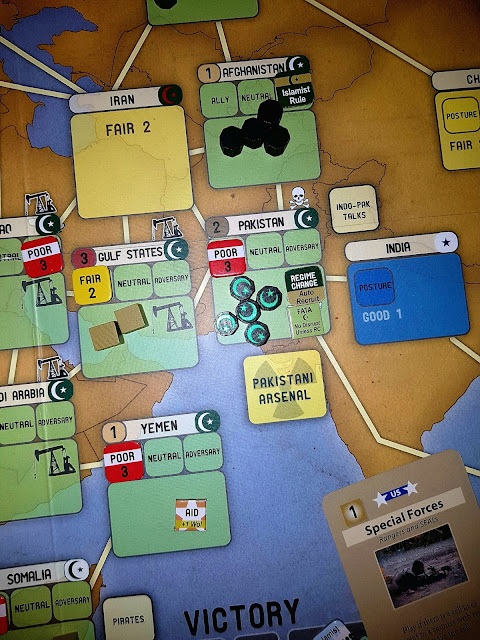 While both sides are trying to improve or degrade the governments of Muslim countries, each side also has some specific tricks up their sleeves.  The USA can attempt to wage a 'War of Ideas' in countries to either make them become allied or, in the case of Europe and other non-Muslim states, to boost prestige and try to get them to the same attitude as the USA.  In our games the USA mostly adopted a 'hard' posture while those woolly, lefty liberals in Europe stuck to a 'soft' attitude which makes it harder for the US to influence others.  The Jihadists meanwhile need to keep up their funding levels so they need to conduct operations to both influence governments but also to bring in funding...either by launching Jihads or by setting up 'plots'.  The Jihadists have a limited number of cells which they can attempt to deploy and move and these can set off unspecified plots which the US can alert host countries to by spending operations points (or not...).  The US can also, in certain circumstances, institute Regime Change by launching a full-blown invasion which switches a country to allied status but potentially leaves it open to Jihadist sympathies.

Because each side has both different victory conditions and different mechanics for playing cards the rules can come across as more complicated than they actually are and it took me a couple of play throughs to get my head round it.  The game comes with both the rulebook but also a 'playboook' which contains a detailed play through of several turns and explanations which helped.

So far it's all in the best possible taste then!?  Actually it comes across fairly respectfully given the subject matter.  It certainly makes you think about the implications of your decisions...leaving a plot to go off in a host country because you don't want to spend the points feels more real than in many boardgames.  I know I've seen reviews in which the reviewer has been very uncomfortable about the subject matter but if you can get your head around that then it's a fascinating game.  Like Twilight Struggle it can be a bit daunting at times to know where to make your next move and it takes time to build up a strategy to influence a country...there are no quick routes to victory...I'm not sure 'fun' is an appropriate word given the subject but it's a very interesting and challenging game and well worth looking out for. 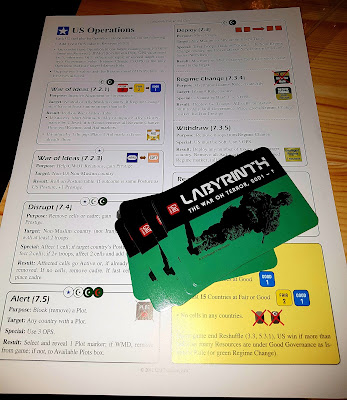 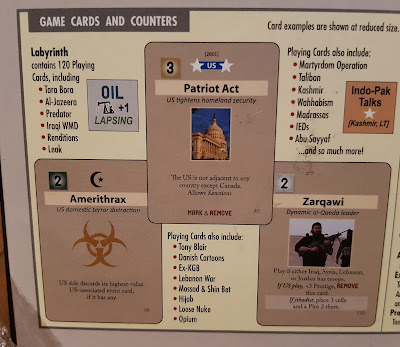