Over on Eric the Shed's blog you'll find a post about his all day Zulu-thon which took place yesterday, not in the Shed itself but in his considerably warmer kitchen.  I was lucky enough to be one of 4 wargamers plus Eric himself who took part in both games.  One of the other players was Legatus Shedlius and no doubt there will be a write up on his blog too very shortly.

As every wargamer worth his or her salt knows, 22nd January is the anniversary of both Isandlwana and Rorke's Drift, and as you can read in Eric's blog it has been a long-term plan of his to refight both battles on the anniversary.  Do pop over there and have a read as it will explain more about his reasons and the epic months of painting to get it all ready on time.

﻿
We assembled at 9am for some fortifying bacon rolls...very gratefully received as I'd already been out in the park with the dogs in -4° for an hour before the game.  The morning game would be a refight of Isandlwana with Eric and Mark taking the plucky but doomed Brits and James, Legatus and I leading the Zulu hordes. We used Black Powder with only a few amendments... the Zulus didn't have an overall Commander and each unit was allowed to either make a guaranteed single move or roll for orders as normal.


I commanded the Left Horn of the Zulu army.  The British right was held by a Rocket battery and assorted Boers, Cape Police and the Natal Native Contingent, commanded by Durnford.  Apart from the Rockets these were all skulking in a donga so our cunning Zulu plan was to largely ignore them for as long as we could and push on towards the British camp while the Right Horn swept round the defending redcoated infantry and into their flank and rear.


Some lucky successful orders meant the Zulu advance on either flank was pretty speedy but the mounted force decided to come out of the donga and take the fight to the Zulus.  I managed to overrun the Rocket Battery (although it did manage to hold off a Zulu Impi for a turn before breaking) and luckily Durnsford's orders to the Sikhali Horse and the Boers resulted in a blunder forcing them to retreat for a turn which gave me time to move another Impi into position to attack them.  I also tussled with the NNC  who did surprisingly well, holding back a Zulu regiment for several turns.  Ultimately though they were forced back and although I wasn't able to rout any of Durnsford's individual units the command finally broke due to the number of shaken units: at this point Durnsford sensibly decided discretion was the better part of valour and led his troops away as fast as their horses could  carry them! 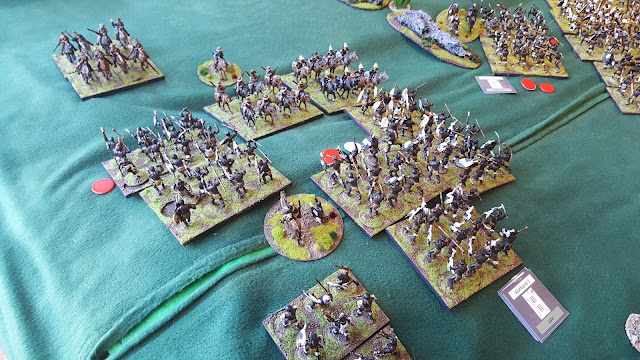 The fight against the Horse
This left the British camp and right flank wide open and we duly piled in.  Over on the Zulu right it had been a bloodier affair as Stephen and James were facing Line Infantry but the sheer volume of 15000 Zulus had told and they were forcing the troops back and units were beginning to fall.  As units began to break and the camp was plundered the last remaining British unit was appropriately the Colour Party who made a last stand on a hill surrounded by Zulus in properly cinematic style!


Despite there being no chance of the British winning from the outset it was still a surprisingly tense game and set us up nicely for the afternoon's defence of Rorke's Drift.  As Eric hasn't posted his report on this game yet I'll wait until he does before posting mine.  Suffice to say it was an equally exciting game and despite using the same rules (with some more substantial tweaks) felt really different.