I'd signed up for the latest Frostgrave Nickstarter from Northstar Miniatures which was due to be shipped out on 17/11.  I'd been out to a meeting on Monday 16/11 and arriving home found the Red Card of Doom which meant the Postie had sneaked up the path and run away again before anyone could answer the door and would mean a trip to the Sorting Office.

I managed this on Thursday and sure enough it was my Frostgrave bundle.  There were a range of deals on offer but I'd gone for a fairly modest collection...the Thaw of the Lichlord supplement, a box of the new Cultists (which look excellent) and a few extra miniatures...some treasure tokens, a Lich Wizard and Apprentice, a Templar (with a big hammer!) and a rather Nazgul-ish looking Frost Wraith. 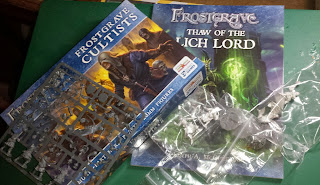 All look excellent and the supplement contains quite a lot of new additions to the rules as well as a series of linked scenarios.  This might prompt me to finish the first batch of figures I've started for the game before I get going on the new figures.


I noticed at the end of the supplement it mentions the next release 'Into the Breeding Pits' which is set in the catacombs and sewers under the city and scheduled for release in July 16.... now I need to check if my son ever got rid of his GW Skaven....!!!