So, up early (for a Sunday), dogs walked round the park and off in the car to SELWG at Crystal Palace.  As this is only about 30 minutes from home (on a Sunday morning that is!) it's my most local show.

I got there about 11, having failed to turn into the main car park and heading accidentally round to the back of the Sports Centre...I did overhear lots of muttering about the parking being a bit of a nightmare and there was a tannoy announcement about several cars that were blocking off about 50 others, so actually my random parking might have worked in my favour!

The hall seemed fairly busy and seemed to stay that way all the time I was there.  There were the usual array of traders and a pretty busy Bring and Buy: this seemed (as usual) to be predominantly selling Warhammer stuff and I struggled to spot any bargains.

I was collared by someone from the Crawley Games Club and roped into playing their Stretcher Party game which was great fun.  Each player controls a pair of stretcher bearers hurrying back across No-Mans-Land with an injured soldier...first one to the Aid Station wins.  Of course there are lots of opportunities to block the other players with barbed wire or to have them shot by snipers or a crazed German pilot stuck in the middle of the table.  The game looked like it was about to be won by a child sitting next to me who made it to within a hairsbreadth of the Aid Station...so naturally when my turn came up and I was able to inflict  a couple of wounds on another player there was only one obvious target and he fell at the steps of the Hospital!  It seemed the right thing to do, even if it did win me the 'Most Evil Player' award....especially as I then had the opportunity to kill off another player in the next turn!  As I was now in front, but carrying a number of wounds, I knew I was pretty much doomed and sure enough the child's father was able to exact a family-revenge by taking me out.  To the child's credit he didn't cry when I killed him off (I may have shed a quiet tear when it happened to me!)

Here are the obligatory selection of photos...as usual apologies to the clubs who put them on and whose details I have generally forgotten... 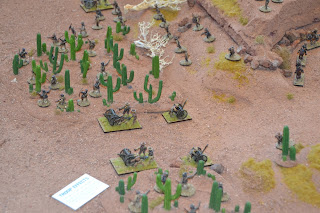 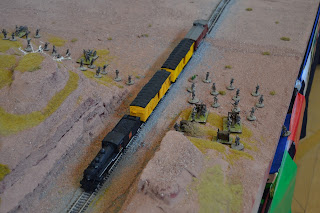 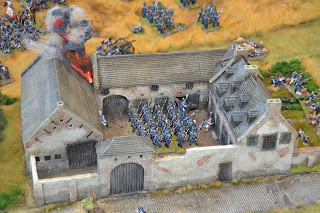 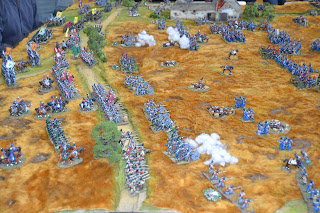 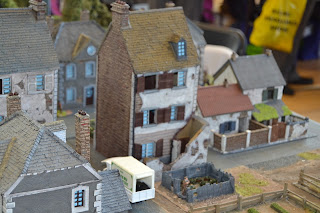 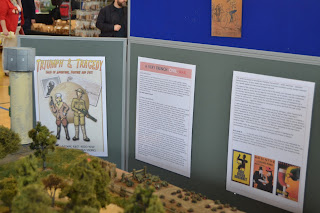 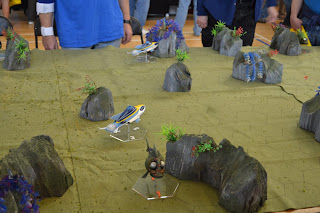 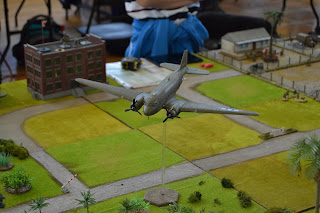 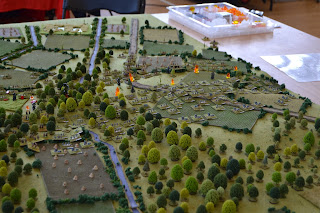 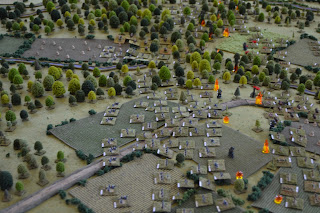 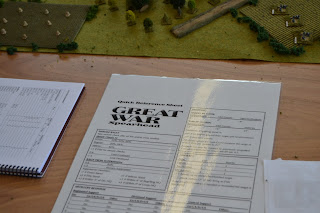 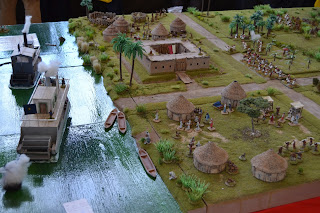 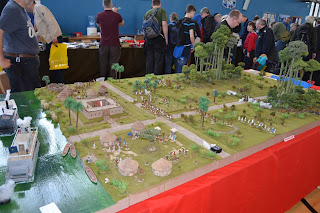 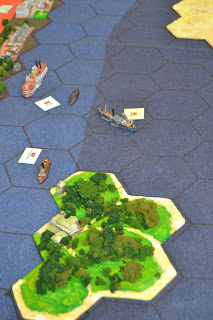 I picked up a few bits and pieces... a couple of 4Ground ruins for Frostgrave and one of the expansion sets for the excellent Heroes of Normandie  boardgame...this is a D Day beach landing set...looks good fun.  While I was browsing at the Magister Militum stall I noticed a box file with a huge amount of small ships and boats for WW2 Coastal games in 1:1200 scale.  Now I have a few ships for this genre in 1:600 from Skytrex but I don't think these are available anymore and there were lots in the box so I succumbed...is it sensible to get stuff I already have in a different scale?? I don't know but these look great and were a real bargain.  The challenge is going to be trying to work out which ship is which! 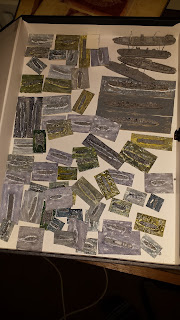 So a good haul and a pleasant day out.  I bumped into someone from the Guildford club as well as Ray, and spotted Tamsin although she was engrossed in an Agincourt game.  Now to ruin my eyesight trying to identify tiny, tiny boats....
﻿
Posted by alastair at 00:18