So last night it was off to the Guildford club for a change for a game of Maurice which has been re-scheduled several times due to work commitments, illness etc.  Sadly this meant I missed what looked like an excellent game at the Shed.  Steve at the club is a great exponent of these rules and has been offering to run through a game with me for some time.

Maurice is one of the range of rules from Sam Mustafa and describes itself as covering "the age of linear armies, from the wars of Louis XIV and Marlborough, through the great dynastic struggles of the mid-century, to the French Revolution."  This isn't a period I'm overly familiar with apart from a bit of dabbling with the French Indian Wars which hardly count as linear!  I often struggle with games in the 18th C/Napoleonic period... all those uniforms send me into a panic although bizarrely later periods such as the Franco-Prussian War don't.

The rules use a very nice set of cards to activate units: these can be used to give a straightforward order (March, Charge, Rally etc) or to give a special bonus (eg  all volley fire is at a +1 this turn, etc).  Some cards also trigger more 'interesting' events...this can be mundane but useful such as activating a force even though it's along way from the Commander, or more interesting... I was able to rather annoyingly place an unexpected marsh right in front of Steve's cavalry: presumably this was down to poor British map reading skills! 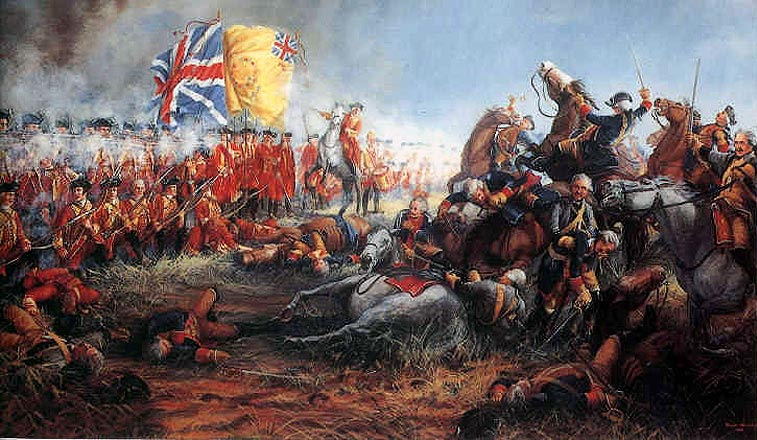 All line units have the option to Volley fire each turn although this then allows your opponent to return fire...as units became increasingly disrupted choosing when to fire became a tricky choice.

Combat is a straightforward  dice-off, adding on a units quality rating and subtracting any disruption points...pick up too much disruption and the unit breaks.  As each unit is removed the army morale level also falls.

In last night's game my French defended against an attacking British Hanoverian army.  Most of the action took place on my left flank where my elite cavalry nearly broke the British horse before stalling and mostly routing.  I managed to bolster the flank with some poor quality infantry but the British horse remained menacingly within charge range.  Having skirmished ourselves to a standstill on the flank, Steve then managed to advance the bulk of the British line and artillery who marched to within volley fire range of the French centre...my remaining infantry were still sat rather ineffectively on the right although I did manage to get them forward to secure my right flank.  Both of us had lost a fair amount of units after the bloody fighting on the flank and I knew Steve's morale was pretty low.  I was also pretty sure that if it came it a close range fire fight the British would have the edge so, throwing caution to the wind I fired a last volley and charged, but not before playing the card I'd cunningly retained for several turns giving my infantry a bonus in combat!  2 British units broke and the army morale crumbled to zero!!

The rules were fun and very intuitive...it only took a couple of turns to pick up the mechanics and we made minimal reference to the rules.  It did help that Steve has played them a lot and I suspect there were lots of additional rules that we weren't using on this occasion but the seemed like an excellent set of rules for a fast paced evening game.  Like a lot of the Sam Mustafa games he very helpfully has a 'lite' version of the rules available for free on his website as a way of luring unsuspecting gamers in and they can be found here
Posted by alastair at 22:45