No posts for a while...lots of goings on in the household and then a couple of weeks away have meant little time for games or painting.  Hopefully things will settle down a bit although I've just started a new job but hopefully this won't eat into important gaming time.

At the end of August we went off to Glasgow for a few days visiting family and then had a week in North Wales, on the Llyn Peninsula near Anglesey.  It was a strange break as this was the first holiday we've spent without our son...he'd decided that a week back home on his own seemed much more appealing than spending it with us.  He's nearly 18 so that seemed fair enough and we packed him off on the train from Glasgow and then drove south by ourselves (with just the dogs for company).

We stayed in the same place as last year...a dog friendly cottage in the middle of nowhere with lots of beaches within easy reach.  Last year I was able to blog about visiting several castles but this time round I only managed one.  Towards the end of the week we went along the coast to Harlech where I was deposited at the castle while wife and dogs went off to terrorise the holidaymakers on the nearby beaches.

It goes without saying that Harlech is pretty stunning and the view as you approach it makes it clear why it held such a strategic position.  Along with the nearby castle at Criccieth it pretty much dominates the northern end of Cardigan Bay and access into Snowdonia.  The castle itself is pretty ruined apart from the external walls but is still very impressive.  Sadly it was also full of small children as it was the school holidays....

Anyway,  here are an assortment of photos of the castle 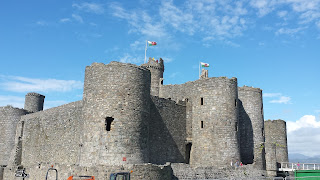 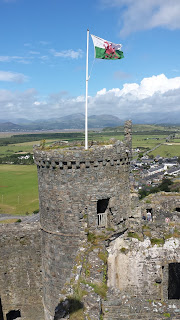 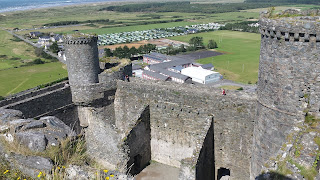 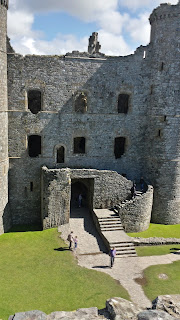 Later that day we stopped at the beach and found a small chapel which was built around the 13th century but has some remnants dating back to the 5th C.  This is the church of St Tanwg at Llandanwg..apparently he was the son of Ithel the Generous of Armorica. 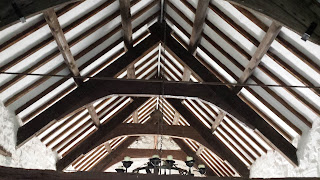 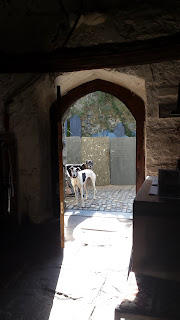 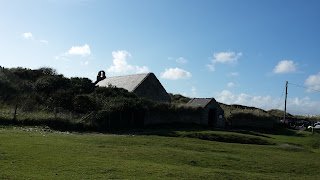