One of my purchases at Salute was the latest Force on Force book... Classified.  This one takes a bit of a departure from others in the series which tend to be focused around a particular theatre or campaign (eg. Afghanistan or Somalia etc).  This volume is based on Special Forces operations from the end of WW2 to the present. 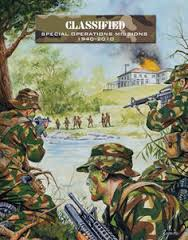 Scenarios range from WW2 raiders in the Pacific  to present day Afghanistan.   Very appropriately for this kind of action there is also a 'Hollywood' section with scenarios based on The Guns of Navarone, Predator, Clear and Present Danger and another one I couldn't work out... sadly no sign of Ross Kemp though!!  As I already had a FoF game pre-arranged for Monday night with Andrew this seemed like an ideal chance to try out one of the scenarios.  Andrew had probably been expecting an Afghanistan based game but was confronted with a table strewn with jungle... we were going to 'Nam! 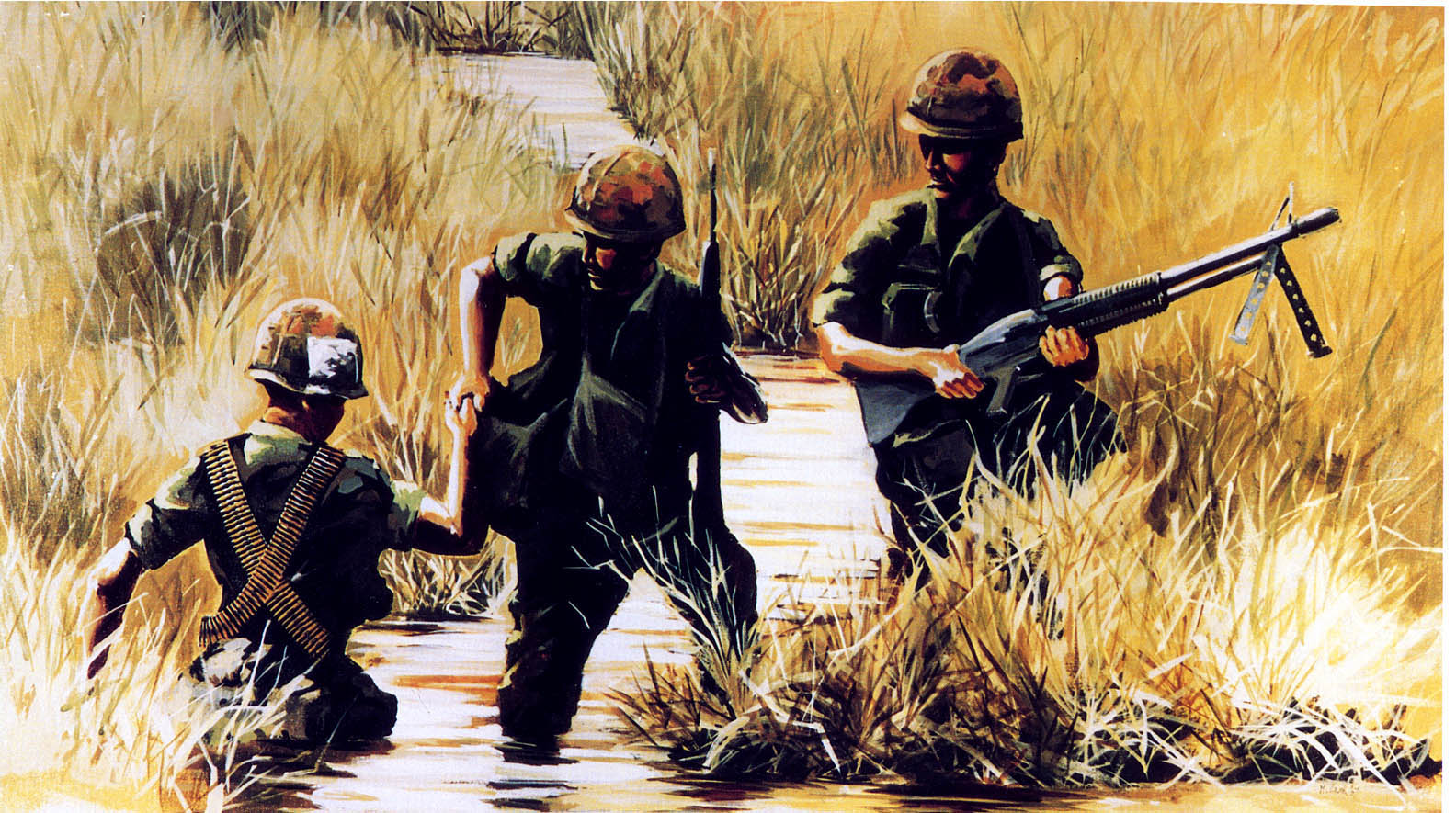 One of the scenarios depicts a 6 man Long Range Reconnaissance Patrol [LRRP] trying to make their way back through enemy lines to a safe point at the other side of the table.  Apart from the road snaking across the table the rest of the terrain was dense jungle so fast movement was going to be an issue.  Opposing the patrol were 3 PAVN squads and a MG section lead by a 2 man command section.

The PAVN squads were forced to deploy randomly from a number of 'hot spots' around the table, limiting their ability to concentrate on the patrol.  The LRRP began moving rapidly off down the road, hoping to gain some distance before too many enemy troops appeared.


An enemy squad appeared at point 1 and after an exchange of fire were forced to move their single casualty back to their tunnels for some attention.  The LRRP took advantage of this and legged it off down the road before encountering another PAVN squad.  Andrew sensibly decided to avoid engaging the higher quality US troops and reacted to the fire by retreating back into the jungle, but annoyingly keeping his squad between the LRRP and the safety of the village.

By this point the PAVN forces were beginning to emerge too rapidly for my liking from various tunnels and spider holes all around the table and were closing in.  My plan [...no really... I really did have one!] was to try and knock out at least one of the enemy squads and use the gap to push through to the village.  I guess there is probably an optimum distance at which the US player should run or fight and I obviously missed it!  The PAVN troops closed in, cutting off the route to safety... 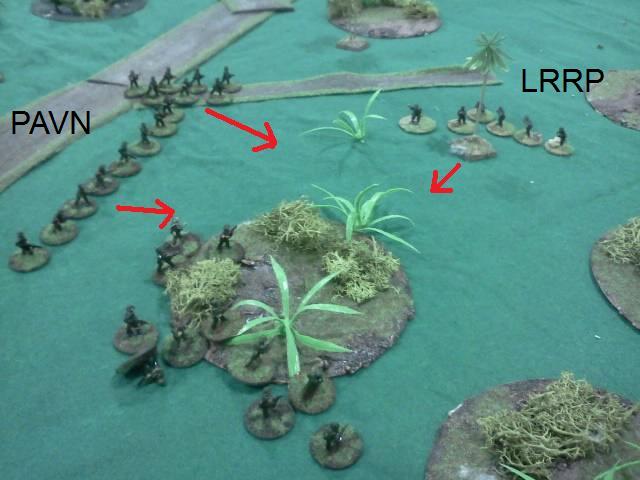 I tried pushing through the main blocking squad but they continued to fall back ahead of me before finally making a stand.  The rules allow units to react to enemy activation by firing or moving so I tried taking advantage of this and using the reaction to slip around the unit but Andrew continued to tighten the noose...


By now the lead PAVN unit was beginning to take quite a battering but their morale held up and they refused to retreat.  At this point the US troops took their first casualty.  As you can see the village was in sight and there was still a [very, very slim] chance that I might make it to safety.

Andrew then threw everyone into a last assault on the beleaguered patrol.  The Vietnamese officer went down in a hail of gunfire drawing the US squad into a firefight [surely worth a medal!] and the LRRP were wiped out in a very cinematic last stand


As I said I suspect I misjudged the point at which I should have kept on running for the village but we were very, very close!  Before the game I had expected the LRRP to be significantly more highly rated  than the PAVN troops.  Force on Force uses the principle that a die roll of 4+ is a success but troops are differentiated by the type of dice you roll to achieve that.  The US troops were using a d10 and the PAVN forces a d8 which gave a slight edge to the LRRP but not a huge one.  Given how close they got to the village I guess the ratings were actually quite well balanced.

A fun game with a dramatic last stand within sight of safety... Rambo would have been proud!!
Posted by alastair at 23:02

Email ThisBlogThis!Share to TwitterShare to FacebookShare to Pinterest
Labels: Force on Force, Vietnam