I find your lack of steering ability disturbing!

Having taken receipt of my Millennium Falcon [and exhausted the pleasure I could get from flying it around the living room and attacking the dog!] we had our latest game of X Wing earlier this week at the club.

Chris had the honour of piloting the Falcon accompanied by an X Wing and I took Darth Vader, accompanied by 2 of his minions in TIE fighters... I'm not really sure where they get the names from... I mean, 'Backstabber and Mauler Mithel'... really??

Anyway, the points were worked out and all was equal.  Despite its size the Falcon is pretty nimble and more importantly has a 360 degree arc of fire, which was to prove pretty useful.  The encounter took place in an asteroid field where doubtless, Han Solo was engaged in some nefarious smuggling and was being brought to account by the forces of law and order.

The game opened with the 2 TIE fighters moving off round the edge of the board, trying to get in behind the X Wing and the Falcon [Backstabber has a bonus when he attacks from the side or rear] which seemed like a good idea at the time although it took them out of the fight for a couple of turns.

The Falcon after an initially cautious advance then steamed straight ahead, as did Darth Vader and in a flurry of missile fire they launched their additional missiles at each other, causing no damage whatsoever!!  The ships then passed by each other and then I had to try and reposition Vader's ship in order to fire, while the Chris' ship could merrily blaze away without worrying about arc of fire. 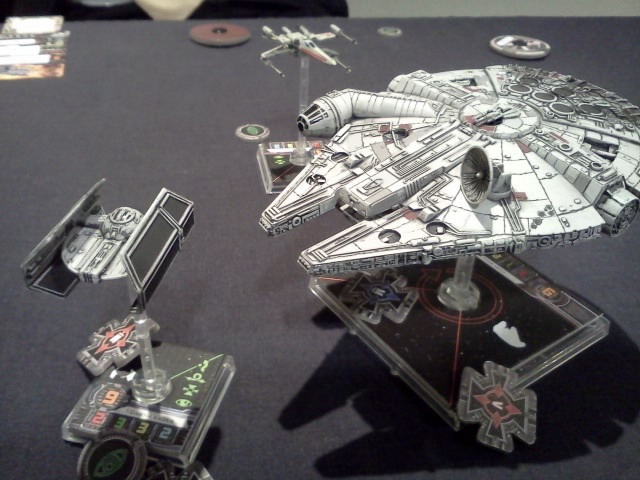 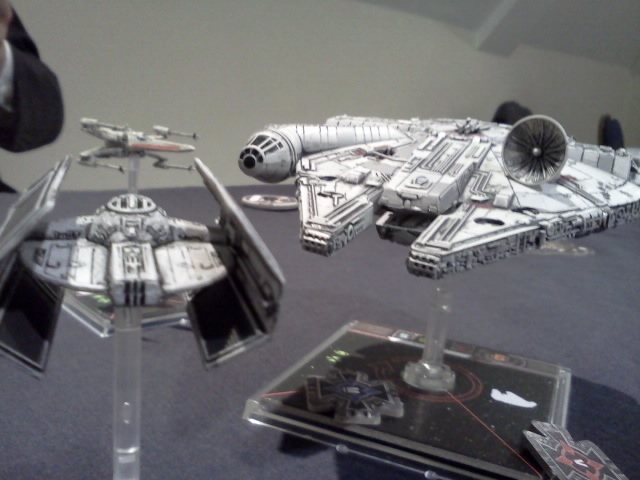 Meanwhile TIE fighter #1 had managed to get into position and fired at the X Wing before promptly crashing into an asteroid and then being blown apart by fire from the Rebel Scum!

The remainder of the game consisted of me flying the ships in ever decreasing circles, trying to get my guns to bear on the enemy while being shot.  The 2nd TIE fighter blazed away at the Falcon, reducing its shields to almost nil before also being destroyed.  Vader meanwhile repeatedly crashed into the Falcon while trying to manoeuvre, proving spectacularly that he must have been the worst pilot in the universe!  In X Wing this doesn't cause any damage but does mean that the crashing ship can't fire or take any actions... as Vader's chief ability is to have 2 actions versus everyone else's 1 this was a major blow.  Inevitably the game ended with the destruction of the remaining Imperial ship and a clean sweep for the rebels.

Lessons to be learned from the game...


Although the points values were all balanced [69 points apiece since you ask!  No... I don't know why I couldn't make it a nice round number either], the game felt quite one sided.  The Falcon has 5 shield points and then 8 hull points to knock off before it's destroyed compared with no shields for the TIE fighters and a couple for Vader and only 3 hull boxes.  Makes sense as its a much larger ship but that combined with the all round fire ability proved very effective.  Perhaps if I'd managed to actually fire in more turns and been able to use the actions which were wasted for most of the game it might have made a difference... of course it could be that it was also down to Chris's tactics but I'd hate to admit that!!!